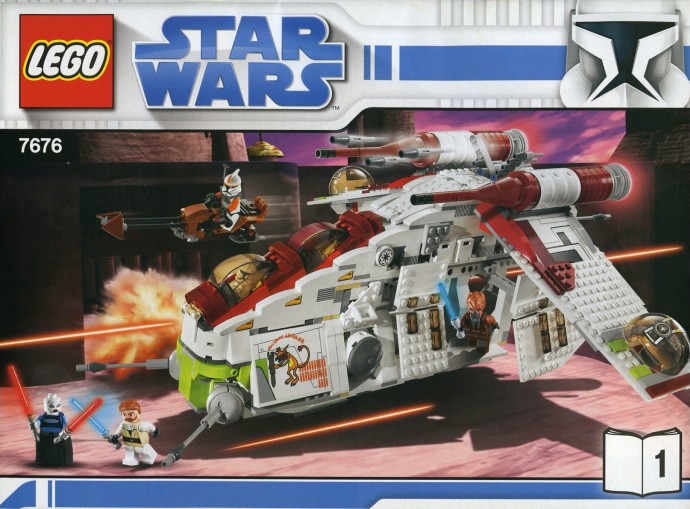 Take the battle to the Separatists with the Republic Attack Gunship! This heavily armed and armored Clone Wars troop carrier can fly and land in any battlefield or hostile terrain. Features include opening troop bay doors, removable command station and healing chamber, positionable cannons, spy droids, flick missiles, a speeder bike that deploys from the back, and multiple decals to create different gunships for your army. But will even Obi-Wan Kenobi and Plo Koon be enough to stop the sinister Asajj Ventress and her double Sith lightsabers? Includes Obi-Wan Kenobi, Plo Koon, Asajj Ventress, Commander Cody and Clone Trooper minifigures! Side troop bay doors open! Open the front side compartment to remove the command station! The 2 cockpits in front and the 2 on the wings open! Features 8 positionable flick-fire missiles on top and 2 rotating missiles in front! Back hatch opens to deploy the speeder bike! Open the compartment on top to access the spy droids! Measures 14" (36cm) long, 17" (43cm) wide and 7" (18cm) high

Be the first to review “Republic Attack Gunship” Cancel reply